Greek and Latin are hard: Oxford classics faculty proposes dropping Homer and Virgil from required curriculum so female students will do better on the tests.

From The Oxford Student:

The Oxford Student has been notified about a proposal by the Classics faculty to remove the study of Homer’s Iliad and Virgil’s Aeneid from the Mods syllabus, a decision which has surprised many across the faculty.

This proposal forms part of a series of reforms aimed to modernise the first stage of the Classics degree, known as Moderations (Mods), which take place during Hilary term of second year for all students taking Classics courses across the university.

The Mods course, which is assessed by a set of ten exams at the end of Hilary, has been increasingly criticised in recent years, due to the attainment gaps found between male and female candidates, as well as between candidates who have studied Latin and/or Greek to A-Level (Course I) and those who have not (Course II).

The removal of Virgil and Homer papers, which take up two out of the ten Mods papers, have been marketed as a move that will reduce the attainment gaps and thus improve access to the subject.

Evidently girls just can’t get into the Trojan War.

The Oxford Classics course, known more formally as litterae humaniores is thought to be one of the oldest at the university, with Classical texts, including those of Homer and Virgil having been taught here since the University’s foundation.

Since it’s [sic! This is Oxford???] founding, the course has gone through a number of changes, the most recent one being the introduction of ab initio language teaching almost five decades ago….

The new decade presents the degree with new challenges, with Classicists saying it must adapt to a constantly evolving demographic of students and their needs.

I don’t know how Oxford plans to pull off teaching classics without, um, teaching any classical literature–but maybe, so as to close those “attainment gaps” for female students, the dons can devote a few units to Helen of Troy’s body-positivity issues

We are at the end of the worst week of NASA history.
Every accident that took the lives of the crew and destroyed the vehicle took place in the space of one calendar week, of course separated by decades.

Monday, January 27th, was the 53rd anniversary of the 1967 fire in Apollo 1 that took the lives of Gus Grissom, Roger Chaffee and Ed White, during a full test on the pad.

The next day, January 28th, is the anniversary of the 1986 Challenger disaster when the main fuel tank exploded 73 seconds after launch.

And today, February 1, is the anniversary of the 2003 Columbia disaster during reentry when undetected damage to a wing during launch allowed hot plasma enter into the wing, burning through the internal structure until the wing tore off the shuttle and tore the vehicle apart.

Spaceflight is inherently a very risky undertaking, but from the records and investigations of these events a pattern emerged that NASA’s higher levels of management failed in the task of proper risk mitigation and letting Quality Assurance and Quality Control standards slide. One would think that after the first time that failure would have been permanently rectified, but bureaucraps being what they are, it wasn’t.

I was pleased to have ended my career working at a place where the standard in every section was:
“If there is a question, then there is no question. Whatever it takes do it.“

Billions of locusts swarm through Kenya

…and there shall be famines and troubles…

Huge locust swarms in east Africa are the result of extreme weather swings and could prove catastrophic for a region still reeling from drought and deadly floods. Dense clouds of the ravenous insects have spread from Ethiopia and Somalia into Kenya, in the region’s worse infestation in decades 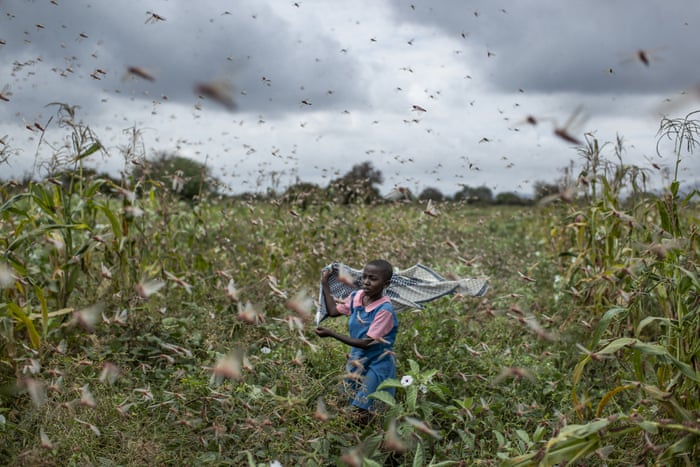 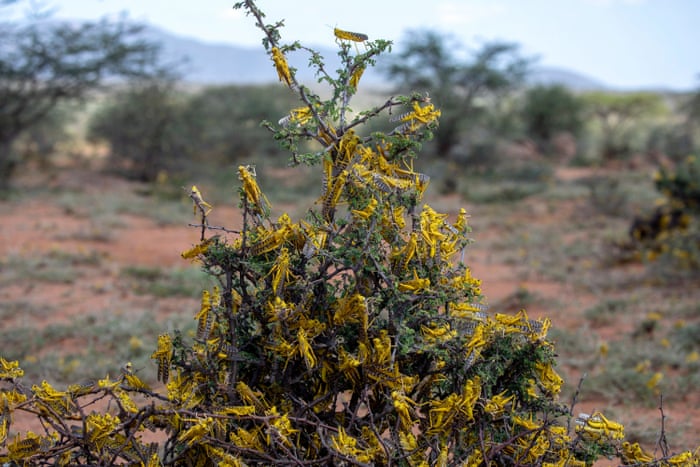