Coronavirus pandemic may actually be bringing families together.

When Ramona and Mario Singer had a nasty divorce four years ago, no one thought they would even speak again.

Yet now they are sheltering in place at his Florida home with their daughter, looking for all the world like a cozy couple.

Friends whisper that, after two months of quarantine, the “Real Housewives of New York” star might be in love again.

Jimmy Fallon also has declared that isolating at home has brought him closer to his wife of 12 years, Nancy Juvonen.

Such is family life in a global pandemic. The reality is a remarkable repudiation of the gloom and doom pumped out by relationship experts, child shrinks and divorce lawyers.

As if the nuclear family were a malignant threat to health and sanity, they predicted the worst from close confinement: domestic violence, child abuse, “irreversible” damage to intimate relationships, and a divorce epidemic.

But anecdotal evidence is that children are happier, and a lot of families are getting along better than ever. Enforced isolation has brought a newfound appreciation for family life that is the silver lining to this wretched pandemic.

You can see clues in the sales figures; board games like ­Monopoly selling like hotcakes and a surge in communal sports equipment such as basketball hoops and footballs.

The craze for home baking has sparked a flour shortage. Without easy access to fast food, families are making their own bread and eating meals together, as fresh produce flies off the grocery shelves.

At a time of national crisis, Americans have had to slow down and turn inward, and those lucky enough to live with family are counting their blessings.

Senior White House and Trump administration officials are planning to launch a sweeping effort in the coming days to repeal or suspend federal regulations affecting businesses, with the expected executive action seen by advisers as a way to boost an economy facing its worst shock in generations, two people familiar with the internal planning said.

The White House-driven initiative is expected to center on suspending federal regulations for small businesses and expanding an existing administration program that requires agencies to revoke two regulations for every new one they issue, the two people said.

While the plan remains in flux, changes could affect environmental policy, labor policy, workplace safety, and health care, among other areas.

The White House is also likely to seek to make permanent some temporary regulations issued by agencies over the past few weeks to respond to the coronavirus pandemic.

These policies are likely to alarm Democrats on Capitol Hill and other experts who have long railed against the president’s team and its attempts to shrink federal regulations on environmental and labor issues, among other things.

More and more people are getting the cluebat upside the head informing them about globalism and the fragility of the international supply chain.

President Donald Trump said Saturday the biggest lesson of the coronavirus crisis was that the United States should not rely on China for their supply chains.

“We’ve learned a lot about supply chains,” Trump said. “We’ve learned that it’s nice to make things in the U.S., I’ve been saying that for a long time.”……

The debate over immigration is over: restriction wins.

The debate over borders is over: they are needed.

The debate over globalization is over: the era of autarky begins.

The debate over Europe is over: it is a geographic expression, not a polity.

The debate over global warming is over: it is irrelevant.

The debate over international institutions is over: only nations matter.

The debate over the People’s Republic of China is over: it is a menace to the community of nations, not a member in good standing.

People ran to gun stores in record numbers as they sought self-defense weapons amid the coronavirus scare, driving sales up about 83% in March and leading to a record number of FBI instant background checks.

Industry officials said that handguns, rifles, AR-style weapons, and ammunition flew off the shelves when states and the federal government started to lock down communities. Many who purchased weapons said they were worried the lockdowns would create chaos or riots.

This year alone, there have been 9,245,857 background checks, which are mostly for gun purchases. That figure is higher than the nation’s total gun background checks for every year from 1988-2005.

Small Arms Analytics and Forecasting, which compiles estimates for gun sales, estimates that a total of 2,583,328 guns were sold in March. That is an 83% increase over March 2019, it said in data shared with Secrets. 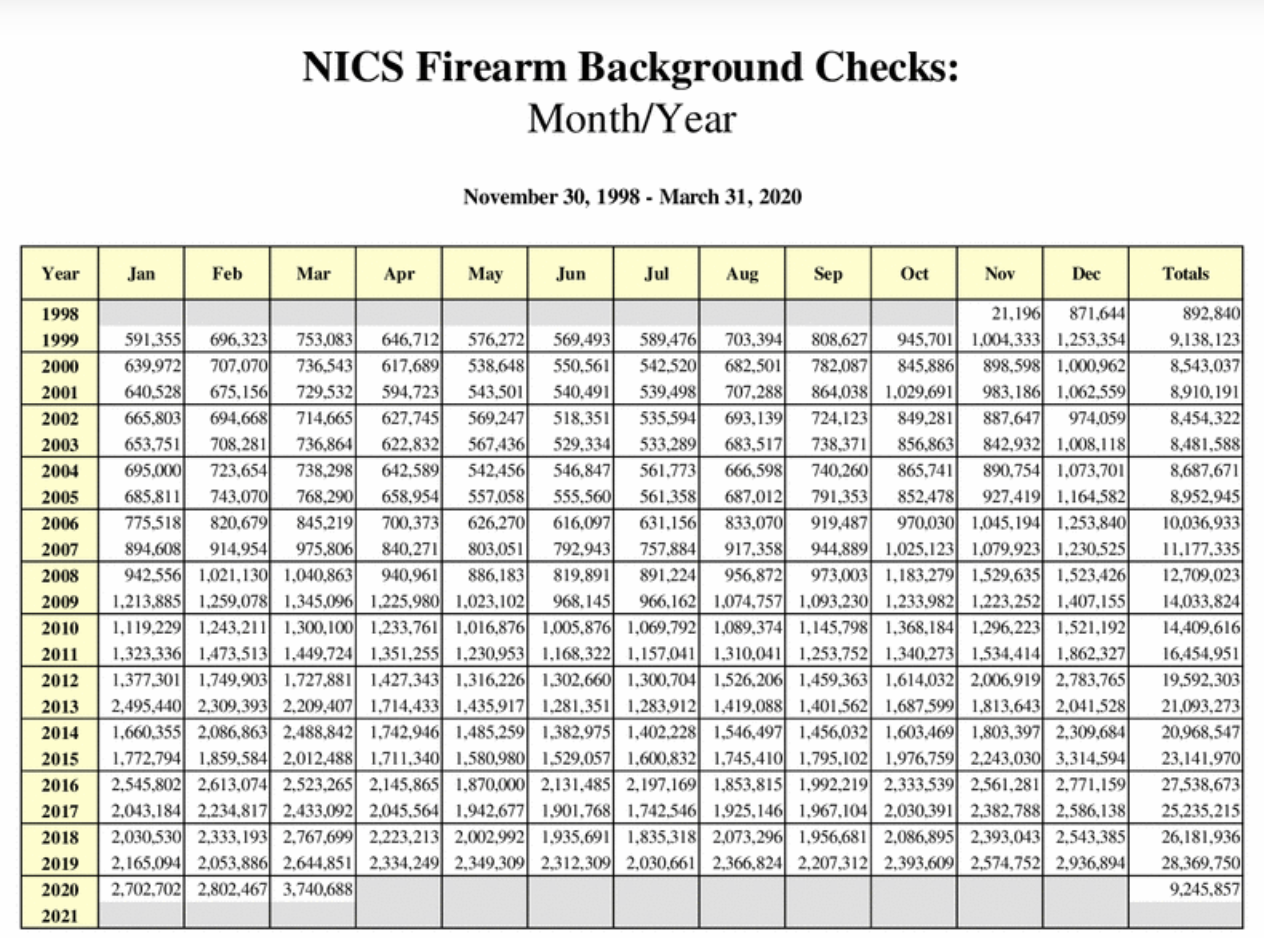 Anecdotal information from gun dealers indicated that most of those guns were AR- and AK-style rifles and shotguns.

Justin Anderson, the marketing director for Hyatt Guns in Charlotte, North Carolina, one of the nation’s largest, told Secrets that there was a line out the door for a week. “Our daily business literally quadrupled, and we had three record days in a row. Self-defense guns, including AR-15s and shotguns, and ammo are the hot commodities,” he said.

And, he added, “Suffice to say, it’s been crazier than I have ever seen it in 13 years in this business!”

The Small Business in Transportation Coalition (SBTC) says urgent action is needed to ease restrictive state and local gun laws amid the unprecedented statewide orders arising from the COVID-19 pandemic.

The “stay at home” order came only hours before New York governor Andrew Cuomo, on Friday, issued a similar order to residents and businesses in New York State.

“These provisions will be enforced,” Gov. Cuomo said during a news conference when making the announcement. “These are not helpful hints. This is not if you really want to be a great citizen. These are legal provisions. They will be enforced. There will be a civil fine and mandatory closure for any business that is not in compliance. Again, your actions can affect my health. That’s where we are.”

Truckers are deemed “essential,” so deliveries will continue, but what about the safety of these drivers now operating in a much different and unknown environment?

Citing the statewide “stay at home” orders, the SBTC contends the safety of truckers is now being further jeopardized as the “crisis worsens.”

With four states now having issued stay at home orders causing metropolitan areas to now be desolate, and with cities like New York and Los Angeles releasing criminals from jails, now more than ever are there significant life threatening dangers to the men and women who drive trucks as America’s supply chain first responders.

The 15,000-member SBTC is calling on federal authorities to preempt state and local laws regarding the right to carry a firearm.

Therefore, in accordance with the Second Amendment to the United States Constitution, we hereby request the U.S. Department of Transportation please issue a preemption order nullifying any and all state and local laws that restrict truck drivers from carrying firearms across state lines throughout America in order to enable them to protect themselves and their cargo as they engage in interstate commerce.

As this is now a matter of life and death, please issue same forthwith.

“The SBTC through its TRUCKER LIVES MATTER campaign has sought the unfettered ability of drivers to carry firearms for self protection nationwide since its inception in 2014,” Lamb tells Transportation Nation Network (TNN).  “We have pointed to Department of Labor statistics that show the unusually high rates of murders on the road for workers in interstate transportation.”

Anadolu Agency quoted Fars as saying that Shabani began his career in 1982 during the Iran-Iraq War.

The commander is one of many leading Iranian political, religious and military figures who have been infected with or died from Covid-19.

The Isis terrorist group is steering clear of Europe because of the coronavirus. Having previously urged its supporters to attack European cities, the group is now advising members to “stay away from the land of the epidemic” in case they become infected.
The group has issued a new set of “sharia directives” that instruct followers to “cover their mouths when yawning and sneezing” and to wash their hands regularly. Isis militants have plenty of experience in covering their faces, though previously they did so to hide their identities when beheading hostages on camera.
In the latest issue of its al-Naba newsletter, the group refers not to guidance from the World Health Organisation or other medical experts, but to recorded quotes by the Prophet Muhammad, known to Muslims as hadiths.
The newsletter refers to a “plague” described as a “torment sent by God on whomsoever He wills”. Another message notes: “Illnesses do not strike by themselves but by the command and decree of God.”
Isis has lost almost all its so-called caliphate in the Middle East after a string of defeats , but its fragmented remains are still active in Iraq and Syria.
The newsletter warned that the “healthy should not enter the land of the epidemic and the afflicted should not exit from it”.
But it may not be safe in the Middle East either — Iraq has already reported 101 cases of the coronavirus and 10 deaths.

And another one for ‘every cloud has a silver lining’. Not that it’s going to totally stop them.

Wednesday gun control bill hearings for the Rhode Island House Judiciary Committee were cancelled over concerns that a “large crowd” of hearing attendees could contribute to the spread of the Chinese coronavirus.

WPRI reports that Rhode Island’s state’s health director, Dr. Nicole Alexander-Scott, made a “strong suggestion” the hearings be postponed. In light of the anticipated crowd of citizens, she noted that “the virus can be spread among people [in] close contact — less than six feet apart.”

Alexander-Scott observed, “Cancelling or postponing large events is an important tool to limit the spread in Rhode Island,”

Among the reasons a large crowd was expected at the hearing was the fact that approximately 17 bills dealing with guns were scheduled for consideration.

One of the bills “defines ‘assault weapons’ and bans selling them if they are not registered.” Another bills “defines large-capacity weapons feeding devices and bans them,” too.

Another bill that would have been discussed was designed to prohibit “teachers from being offered an incentive to get firearms licenses,” while yet another would have put new storage requirements and penalties in place for law-abiding gun owners.

The Associated Press reported that the “hearing on gun control measures” will be rescheduled, but provided no time-frame in which the rescheduled hearing might occur.