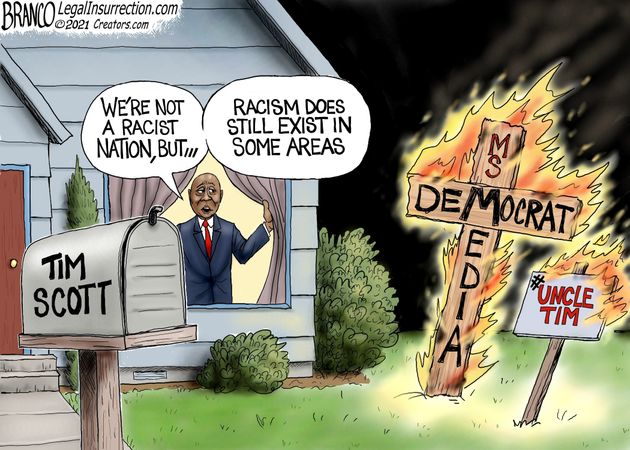 The effectiveness of Sen. Tim Scott’s GOP response to President Biden’s speech last week has been made clear by the volume of left-wing vitriol it has provoked. As we mentioned in our post last week, a nasty slur trended on Twitter in the hours following Scott’s address, and multiple white celebrities took it upon themselves to lecture Scott for not thinking the way he’s “supposed to” as a Black man. Two of these white celebrities were “The View’s” Joy Behar, and Democratic spokesperson and part-time comedian Jimmy Kimmel:

Kimmel’s most enduring contribution to our political discourse, of course, was losing the Ted Cruz in basketball. It’s worth noting that both of these people have…worn blackface, which would make them experts on racism on some level, just not the way they seem to think they are. Neither has been canceled, naturally, because they are on the correct tribal team.

By contrast, Megyn Kelly was famously shown the door at NBC (ostensibly) for talking about blackface. In addition to the social media venom from a mob of blue checkmarks and random users, a Democratic official in Texas is under fire for deploying a slur against Scott, suggesting that he’s black on the outside but white on the inside – an incredibly racist statement. This bigot is very white:

A Texas Democratic official is facing calls to step down from his role after he called Sen. Tim Scott, R-S.C., a racial slur.  “I had hoped that Scott might show some common sense, but it seems clear he is little more than an oreo with no real principles,” Lamar County Democratic Party chair Gary O’Connor wrote in a now-deleted Facebook post, referring to Scott’s rebuttal to President Biden’s Congressional address on Wednesday…The first-term [GOP] congressman called on O’Connor to “apologize and step down immediately” for his racially charged comments slur and asked the Texas Democratic Party and the NAACP “to condemn these words.” Fallon also said the party “should take swift action to censure him.” The Texas Democratic Party didn’t immediately return Fox News’ request for comment.

The governor of Texas is also weighing in:

The Democrats maintain a party of organized hatreds — they do not have a philosophy; they have an enemies’ list — and they harbor no hatred as intense as the one they nurse for Republicans who are not white men, which is why Senator Scott has been dismissed as a man who “only darkened the upper chamber’s complexion,” as one Washington Post columnist put it. Senator Scott is not alone in this: Representative Elise Stefanik of New York, a Republican who at the time of her election was the youngest woman to serve in the House, is hated with a special intensity. Nikki Haley, a Republican and the first woman to serve as governor of South Carolina, is subjected to slurs directed at her Punjabi ancestry. For the Democrats, there is exactly one mode of public life available to those who are not white, male, heterosexual, etc.: as Democrats. The attitude is distinctly proprietary…Tim Scott is a black Republican senator, as well as a Protestant, a South Carolinian, a businessman, a former county official, a graduate of Charleston Southern University, a bachelor, and much else. But for his race-minded critics, only two of those things matter: that he is black and that he is a Republican — a combination that makes him, in their minds, an anomaly and an outrage.

Since he mentioned Haley, I’ll leave you with the former governor and ambassador replying to the latest round of nasty, racially-tinged trolling from “progressives” about her heritage and her name: