BLUF:
Whenever a law is pro-gun, the ATF tells FFLs to ignore it. When a law is anti-gun, the federal agency demands that the dealers comply.

This week Texas FFLs received a letter from ATF Assistant Director of Enforcement Programs and Services Alphonso Hughes regarding House Bill 957 (HB957). The Texas legislator passed HB957 during the last session. The bill exempts suppressors manufactured in Texas and that remain in Texas from the National Firearms Act (NFA).

Texas HB 957 is similar to the Kansas Act, which also exempted suppressors made in Kansas and remained in Kansas. In 2014, Jeremy Kettler purchased a suppressor from a military surplus store. Since the manufacture made the suppressor in Kansas and Mr. Kettler didn’t leave the State, he thought he was within the law. The ATF took the opportunity to arrest and prosecute Kettler for violating the NFA.

Gun Owners of America took up the case but ultimately lost in Circuit Court. The Supreme Court turned down the opportunity to hear the appeal. Many in the gun-rights world hoped that the Supreme Court would take the case and that it would have been a death blow to the NFA. The Supreme Court doesn’t have a strong history of taking gun cases. The ATF also sent letters to FFLs located in Missouri, ordering them not to obey House Bill Number 85. HB 85 is known as the Second Amendment Preservation Act (SAPA). The ATF seems to have a problem with certain parts of the new law.

Some of these conflicts that the ATF list that is considered infringements by Missouri are:

These letters seem to be setting up a state law vs. federal law showdown. The ATF demands that FFLs obey federal law even if it puts them in jeopardy of violating state law. This ultimatum could become a state’s rights issue if both sides refuse to back down. 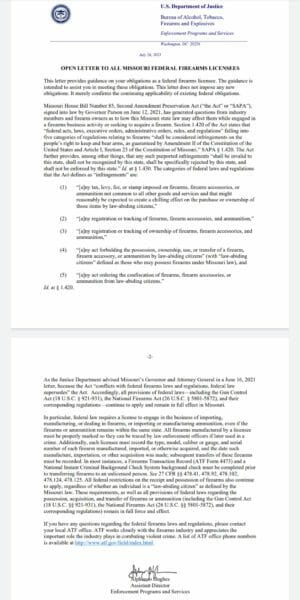 The question that remains is if the DEA sent out similar letters to states that have legalized marijuana. Those states have laws that do contradict federal law dealing with drugs. Could it be the federal government just targeting guns and doesn’t care about other conflicts between state and federal law? The Biden administration is openly hostile towards guns and gun owners.

The ATF also sent a letter to FFLs in Colorado regarding HB298, Colorado’s Expand Firearm Transfer Background Check Requirements. That bill requires FFLs to wait for a “proceed” from the Colorado Bureau of Investigations (CBI) before transferring a firearm. Under federal law, a dealer may transfer a gun after three days if a person is stuck in a delayed status. Under the new Colorado law, there is no end to the time limit to hold up a transfer. 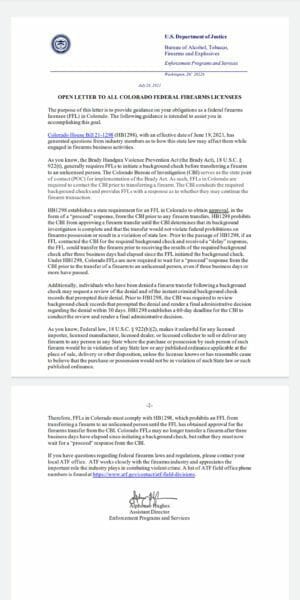 The ATF requires FFLs to comply with this state law and ignore the federal statute. This request seems to run contradictory to the other orders that the Bureau has issued. Gun rights advocates say this double standard shows the ATF’s when it comes to guns.

Whenever a law is pro-gun, the ATF tells FFLs to ignore it. When a law is anti-gun, the federal agency demands that the dealers comply.

The ATF did not return AmmoLand’s request for comment.