Nearly 6 in 10 Americans think that homicides or mass shootings, rather than suicide, are the leading causes of gun deaths in the United States, a new survey shows.

These results cast light on yet another way that Americans are dramatically misinformed about gun deaths, in turn reflecting poorly on the state of the political discourse surrounding guns. Fewer than one in four respondents correctly identified that suicide accounts for the majority of gun-related deaths.

Respondents were asked whether suicides, mass shootings, “murders other than mass shootings,” or “accidental discharges” were “responsible for the most gun deaths in the United States.” The most popular answer, offered by more than 30 percent of respondents, was non-mass homicides; another quarter said mass shootings, while 23 percent said suicide. 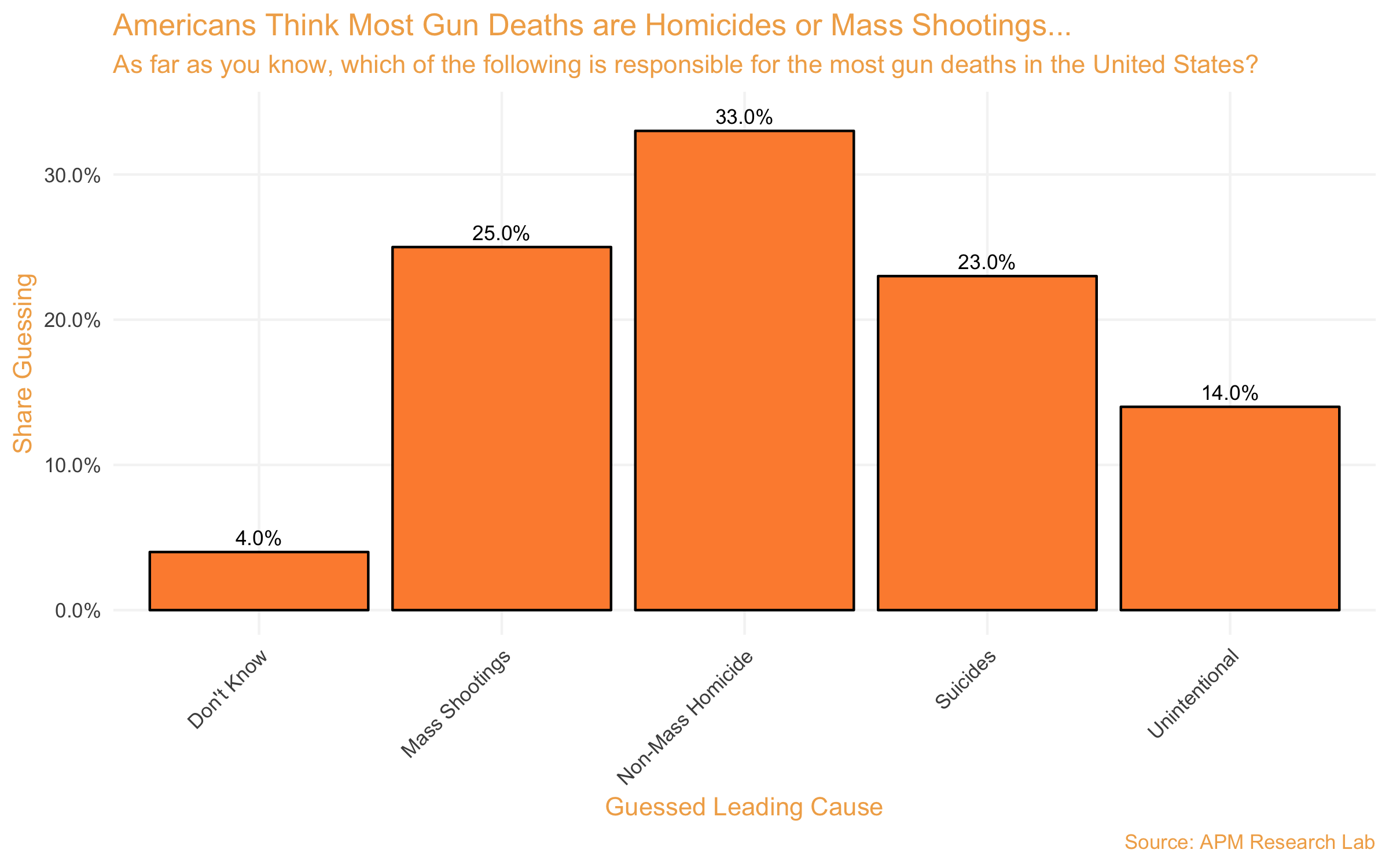 These views, however, are massively out of line with the real numbers. Of the approximately 39,000 gun deaths in 2017, the most recent year for which data are available), 60 percent were self-inflicted. Another 37 percent were non-mass homicides, while mass shootings accounted for just 117 deaths, according to Mother Jones‘s mass shooting database. 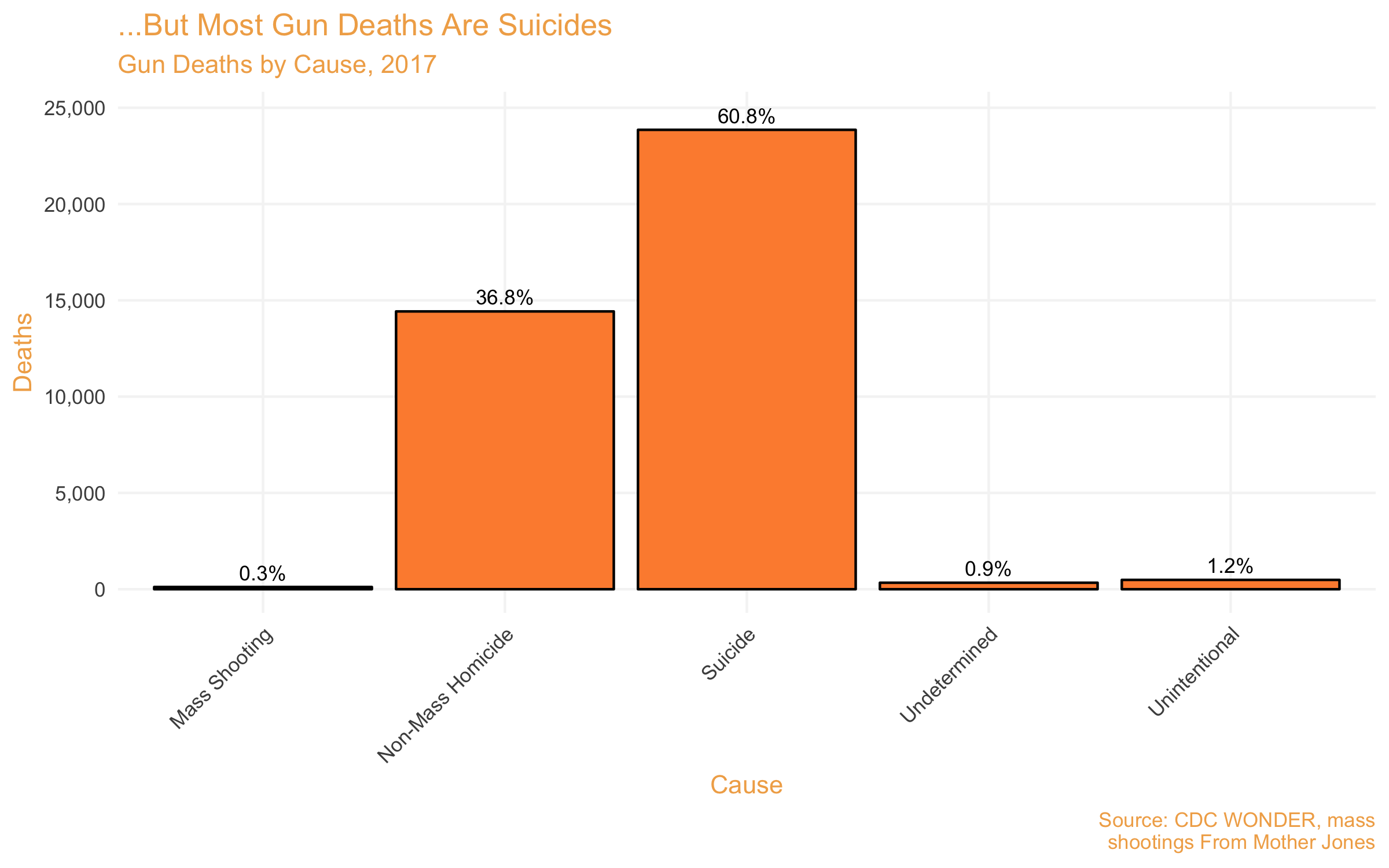 Among the various demographic groups APM surveyed, not a single one knew that suicide is the leading cause of gun deaths. Those that came closest were parents with children at home (30 percent named suicide), gun owners (30 percent), those making in excess of $75,000 a year (29 percent). Only 4 percent of Black respondents named suicide, as well as just 18 percent of female respondents.

The predominance of gun suicide may surprise many Americans, but it has been the norm for decades. This reality reflects both the steady decline of violent crime since its 1992 peak, as well as the steady rise in the suicide rate since the turn of the millennium. 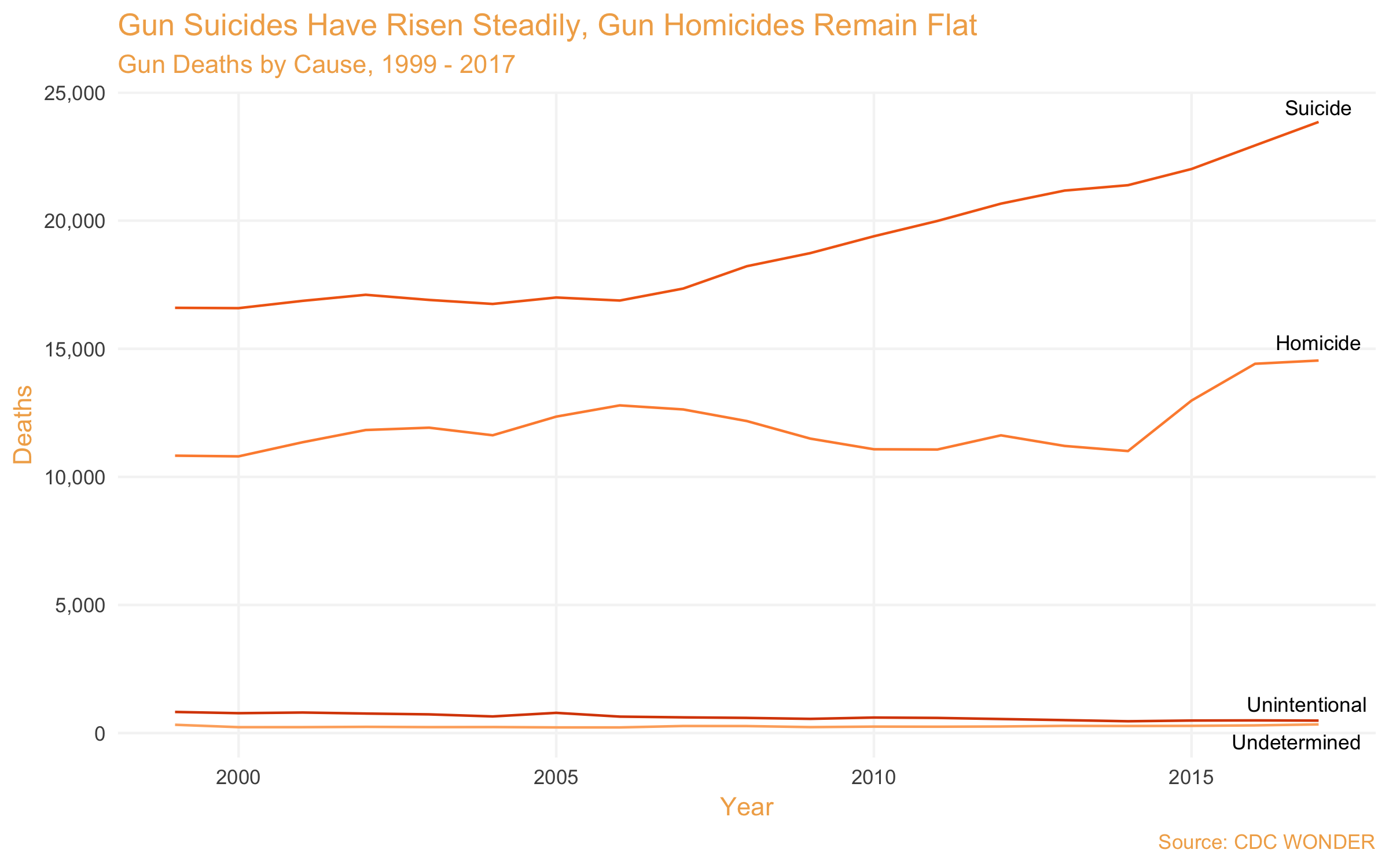 At the same time, Americans’ alarming lack of knowledge about the causes of gun deaths is just one instance of the misinformation that fuels the gun debate. For example, while 25 percent of respondents think that mass shootings are responsible for the majority of gun deaths, they actually only make up a tiny fraction. School shootings, in particular, are the subject of nationwide PSAs, in spite of causing an even smaller, and probably declining, share of deaths.

There are policy implications to this lack of knowledge. As the Washington Free Beacon recently reported, rifles are used in just 2.8 percent of murders, a figure that fell by 24 percent in 2018 alone. Rifles were used in fewer murders than knives, fists, and blunt objects, according to the FBI’s Uniform Crime Report. But, as a Free Beacon analysis showed earlier this year, every 2020 Democratic candidate supports a federal ban on “assault-style” rifles; few have offered comprehensive plans to tackle the rising suicide rate.