The last time SloJoe said “I promise you, those people will pay” a drone strike killed an innocent man and children. Once again he can’t think past the first thing that pops into his head.

Observation O’ The Day
Another reason may just be the concentration of ownership of major media in the hands of a few, very wealthy, people. Wealthy people have feared armed commoners for most of recorded history, and especially since the invention of reliable, concealable firearms, so publication of news likely to encourage gun ownership is discouraged.

There Are Far More Defensive Gun Uses Than Murders in America. Here’s Why You Rarely Hear of Them.

While Americans know that guns take many innocent lives every year, many don’t know that firearms also save them.

On May 15, an attacker at an apartment complex in Fort Smith, Ark., fatally shot a woman and then fired 93 rounds at other people before a man killed him with a bolt-action rifle. Police said he “likely saved a number of lives in the process.”

On June 30, a 12-year-old Louisiana boy used a hunting rifle to stop an armed burglar who was threatening his mother’s life during a home invasion.

On July 4, a Chicago gunman shot into a crowd of people, killing one and wounding two others before a concealed handgun permit holder shot and wounded the attacker. Police praised him for stepping in. 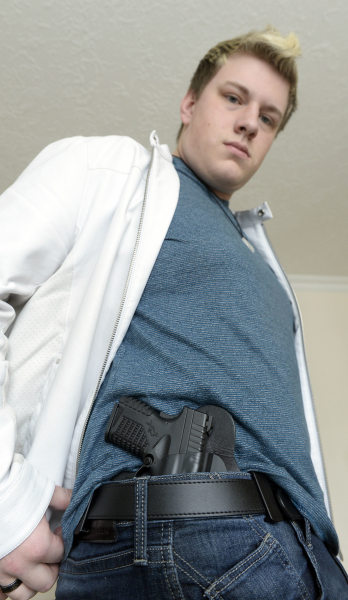 According to academic estimates, defensive gun uses — including when guns are simply shown to deter a crime — are four to five times more common than gun crimes.
Al Hartmann/The Salt Lake Tribune via AP

These are just a few of the nearly 1,000 instances reported by the media so far this year in which gun owners have stopped mass shootings and other murderous acts, saving countless lives. And crime experts say such high-profile cases represent only a small fraction of the instances in which guns are used defensively. But the data are unclear, for a number of reasons, and this has political ramifications because it seems to undercut the claims of gun rights advocates that they need to possess firearms for personal protection — an issue now before the Supreme Court.

Americans who look only at the daily headlines would be surprised to learn that, according to academic estimates, defensive gun uses — including instances when guns are simply shown to deter a crime — are four to five times more common than gun crimes, and far more frequent than the fewer than 20,000 murders each year, with or without a gun. But even when they prevent mass public shootings, defensive uses rarely get national news coverage. Those living in major news markets such as New York City, Washington, D.C., and Los Angeles are unlikely to hear of such stories.

END_OF_DOCUMENT_TOKEN_TO_BE_REPLACED

The same observation as it applies to goobermint and the elite vis-a-vis ‘climate change’ also applies to them and the bug:
When they start living their own lives like it’s a real crisis, I’ll begin to consider that it may possibly be a real crisis.

The Los Angeles County Department of Health defended the maskless 2021 Emmy Awards Monday and said it was not in violation of the county’s mask mandate because “television” productions are granted “exceptions.”

“LA County’s Health officer order requires everyone to wear a mask indoors, whether vaccinated or unvaccinated,” read a statement from the health department, obtained by a CNN reporter.

New: LA County Department of Public Health tells me that the mask-less Emmys were not in violation of the county's mask mandate because "exceptions are made for film, television, and music productions” since “additional safety modifications” are made for such events. pic.twitter.com/6S105zYjbJ

Biden was put forward as being the ‘answer’ to restoring a purported loss of the U.S.’s reputation and creditability. Instead, with Afghanistan and these latest idiocies, he and his puppet masters have plowed it under.
As we said of stupid failure in the military: “Hmmm, it briefed well.”

U.S. Secretary of State Antony Blinken has deleted a statement posted to his official Twitter account on Thursday that said the U.S. would “stand with the people of Hong Kong,” the South China Morning Post reported Friday.

Beijing should let the voices of all Hong Kongers be heard. The PRC [People’s Republic of China]’s disqualification of district councilors only weakens Hong Kong’s long-term political & social stability. We stand with the people of Hong Kong and continue to support their human rights & fundamental freedoms.

The U.S. Secretary of State replaced the statement with a more muted tweet posted later on September 16:

The PRC’s disqualification of seven pro-democracy district councilors undermines the ability of people in Hong Kong to participate in their governance. Governments should serve the people they represent. Decreasing representation goes against the spirit of Hong Kong’s Basic Law.

France accuses Australia, US of ‘lying’ in escalating crisis

France on Saturday accused Australia and the United States of lying over a ruptured Australian contract to buy French submarines, warning a grave crisis was underway between the allies.

The deal extends US nuclear submarine technology to Australia as well as cyber defence, applied artificial intelligence and undersea capabilities

Australia’s decision to break a deal for the French submarines in favour of American nuclear-powered vessels sparked outrage in Paris, with President Emmanuel Macron recalling France’s ambassadors to Canberra and Washington in an unprecedented move.

The row has sparked a deep rift in America’s oldest alliance and dashed hopes of a post-Donald Trump renaissance in relations between Paris and Washington under President Joe Biden.

Current D.C. politics is nothing more than Kabuki Theater to lull the masses.

If you’re dealing with Chinese who have close family still living in China, it’s a good bet they’re compromised due to valid threats made against their family by the Chinese Communist goobermint.