What a horribly authoritarian and dystopian way to live.pic.twitter.com/BdUuM4uUa9

Maybe the World Economic Forum globalists are behind it, maybe not. What is certain is the just-released “Died Suddenly” documentary presents abundant data and disturbing testimony from doctors, journalists, military figures, funeral directors and embalmers that lots of vaccinated people are dying suddenly and with strange fibrous blockages in their arteries and veins. What the hell is going on?- Mark Tapscott

Indiana’s own Eugene Morrison Stoner cut his teeth in small arms as a Marine Corps armorer in World War II and left the world some of the most iconic black rifles in history.

Born on Nov. 22, 1922, in the small town of Gosport, just outside of Bloomington, Indiana, Stoner moved to California with his parents and graduated from high school in Long Beach. After a short term with an aircraft company in the area that later became part of Lockheed, the young man enlisted in the Marines and served in the South Pacific in the Corps’ aviation branch, fixing, and maintaining machine guns in squadrons forward deployed as far as China.

Leaving the Marines as a corporal after the war, Stoner held a variety of jobs in the aviation industry in California before arriving at ArmaLite, a tiny division of the Fairchild Engine & Airplane Corporation, where he soon made his name in a series of ArmaLite Rifle designs, or ARs, something he would later describe as “a hobby that got out of hand.”

END_OF_DOCUMENT_TOKEN_TO_BE_REPLACED

Thank you for putting on yesterday’s conference. I am a gun owner and member of the firearm community based in Chicago. I share your desire to decrease gun deaths and find common ground. As a sign of my good faith intentions, I recently put on a Safe Storage presentation with a Moms Demand Action representative for our school community despite vehemently disagreeing with their public policy platform.

I feel that the strongest part of yesterday’s presentation was the Hot Button Topics discussion between Amy Swearer and Fred Guttenberg. I am still shocked that Fred wold be willing to sit down with Amy. More conversations like that need to happen where each side sits down with one another to try and have good faith conversations.

I am writing after watching the entirety of yesterday’s presentation. I watched because I was interested in what the panel, which included elected officials and other policy makers, would put forward as give and take compromises to get the gun community onboard. Unfortunately I feel as if it was a hugely blown opportunity on the whole as zero policy compromises were put forward by any of the speakers except Dr. Seigel.

Many members of the gun community showed up to watch in the hopes that we may have found a partner where we could work together. Instead we were shown a parade of speakers who have all publically asked for or voted recently for assault weapons bans. Governor Roy Cooper, Rep Moulton, Rep Dean, are all elected officials who have publicly pushed for bans and made clear yesterday that not only are they unwilling to remove these bans (despite the organization’s stated policy as presented by Michael Seigel) but rather they said explicitly that they are just waiting for the opportunity to have the votes to pass it in Congress. Congressman Moulton even threw in the usual talking point about shooting deer with AR-15s and needing better aim. Is insulting comments REALLY how you intend to find common ground with the majority of responsible gun owners who train to use their firearms not for hunting, but to defend themselves and family? Our supposed “voice at the table” Former Rep Walsh put forward no push back but rather spent most of the panel virtue signaling his hatred of the NRA (who we all hate too btw). There was not one word, not one proposal that was put forward as a give-and-take compromise with the gun community. That first panel lost many of us but I continued watching.

Former Schumer aid Emily Amick’s social media is full of video clips demonizing gun owners who own AR-15s, calling for an end to the filibuster to push gun ban proposals, and glowing videos of Congressman Cellini saying “spare me the constiutional right bull sh*t.” How was including her, who again has shown no sign of willing to compromise on any policy, intended on getting buy in from the gun community?

What was the point of allowing WH Assistant Stefanie Feldman to read a 5 minute speech about Biden’s domestic policy, including once again her emphasizing that he wants to ban assault weapons and if you don’t agree with the ban then you don’t actually care about crime? Again not one word about compromises that the administration is willing to make with the gun community.

The gun community has a huge amount of respect for Stephen Guttowski and I am glad you included him in the discussion. Stephen’s method and podcasts, calmly discussing the DETAILS of firearm policy and law should be how 97 Percent moves forward in discussions with the gun community.

Unfortunately I’m not sure your organization will get the chance after yesterday’s conference as much credibility was lost. You simply cannot parade out a bunch of speakers, many of whom are board members, who have publically been strong advocates of gun bans and then ask us to trust your organization because…… your official platform says you don’t want an assault weapons ban? We all remember Conor Lamb campaigning with video of him shooting an AR-15 and then voting to ban them this year.

Richard Aborn (instrumental proponent of 94 AWB), Rep Steve Israel (proponent of AWB and on recent 97% podcast spoke favorable of NY’s Bruen-response bill and explained his idea of compromise as “getting 60% rather than 100%” of gun control policies he wants), and Rep Moulton (who’s service I respect yet again just voted for an AWB), are all prominent members of your board. Why should the gun community trust you???

So when will the gun community trust you? When you come forward with REAL policy compromises as well as fight to overturn abusive laws. We want to stand shoulder to shoulder with you in calling out California’s Handgun Roster or New York’s post-Bruen concealed carry restrictions. We are willing to discuss federal Universal background checks in exchange for national concealed carry reciprocity. A federal license (with training perhaps!) in exchange for not needing FFL NICS checks for transfers. These were the types of discussions we were expecting when we showed up to watch yesterday. The ONLY person who in good faith touched on any of this was Dr. Siegel.

I will end with a humorous fictional story written about someone attending the conference in-person that is circulating among the gun community.

I hope your organization will take this criticism to heart and revamp how you plan on engaging in good faith with the firearm community. Many of us are still willing to talk, but not just about how much we are willing to give up in exchange for nothing.

Remember, Professor Yamane is presenting the standard model, not defending it.

This video concludes my ongoing series systematizing the dominant academic approach to understanding Gun Culture 2.0, what I call “The Standard Model of Explaining the Irrationality of Defensive Gun Ownership.”

Here I engage the 5th of the model’s 5 points: That something other than objective risk motivates defensive gun ownership.

Dr Yamane bats it out of the ballpark again. 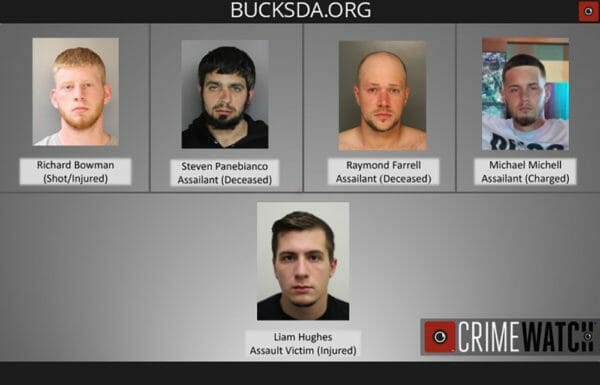 The District Attorney sure sounds like he doesn’t like what the law required him to do and restricted him from doing. I think if he could have finagled a way, he would have charged the real victim. Poor District Attorney.

Let this DA’s words be an illumination of the fact that a lot of prosecutors do not like the idea that people have the right to defend themselves.

You can’t make this up, New Jersey edition

The last thing I want to say to people, and some of my own Democrats have committed to me, a commented that to me, this does nothing [to] stop the illegal gun trade, or the illegal criminal, illegal possessions, or criminal content and…you’re right. This doesn’t. It was never supposed to address that.

This is addressing the legal, law abiding, responsible citizens. That’s what it’s designed to do.

“Watch me,” President Joe Biden told MSNBC’s Jonathan Capehart this week during one of the most awkward interviews in the history of American politics.

So we did. It was similar to watching John Fetterman, the stroke victim and Democratic candidate for U.S. Senate in Pennsylvania, bumble his way through a debate after his campaign allies in the media insisted he was fine.

“Am I don’t have the same pace?” the president asked Capehart during a discussion about his fitness for office. “Everything physically about me is still functioning well, so you know, and mentally too.” The evidence suggests otherwise.

Biden wandered around like a sluggish toddler chasing a butterfly, told a group of transgender activists about the Democratic Party’s plan to “overrule Dob,” meaning the U.S. Supreme Court’s ruling in Dobbs v. Jackson, which struck down Roe v. Wade, the landmark 1973 ruling that Biden couldn’t remember. He expressed concern that the American “pleople” are “vuedejegguli,” and pledged to encourage economic “innervation.”

The commander in chief, who turns 80 next month, insisted (without evidence) that Vice President Kamala Harris was doing a “great” job. (Just 38 percent of Americans have a favorable opinion of Harris.) A Washington Free Beacon analysis determined that Biden, Harris, and Fetterman would combine to form a single human being of average competence and speaking ability.

Have a great weekend!

His brain is acting like a computer with defective RAM.

Observation O’ The Day
Given how much editing NBC and its sister networks must do to get usable footage of Biden, that they allowed this to air could be a preview of how the networks will start treating him post-midterms. –Ed Driscoll

BIDEN: "It's my intention to run again."

And the SS guy at the end waving off the guy videoing. They know.

He believes this is funny

NOW – Biden: "All my buddies either became a firefighter, a cop, or a priest. I wasn't qualified for any of them, so here I am."pic.twitter.com/BRYtE21Rek

Sun Tzu 101: Know the enemy as well as you know yourself. Doctor Yamane is studiously researching the anti-gun movement.