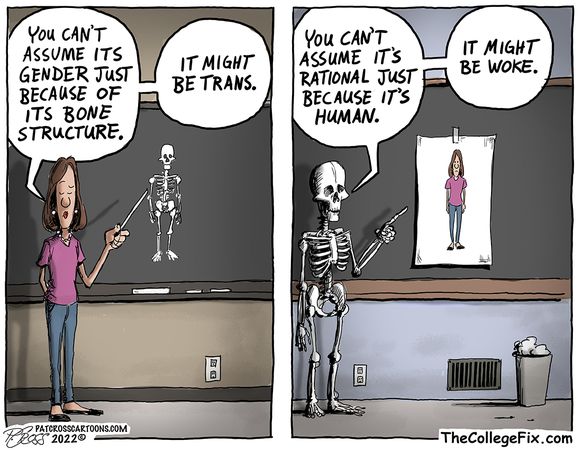 Not even archaeology is safe from woke leftism

One of the things archaeologists typically do shortly after excavating human skeletons — or parts thereof — is to determine the sex of the person whose bones they have just uncovered.  It is easily possible to ascertain whether a skeleton is from a male or female using objective observations based on criteria such as the size and shape of the bones.  (Criminal forensic detectives also do this as a matter of course.)

However, a new school of thought within archaeology is urging scientists to abandon the practice of assigning sex to ancient human remains.  This school of thought is itself being pushed by gender activists who are arguing that scientists cannot know how an ancient individual self-identified.  Really.

For example, Canadian Master’s degree candidate Emma Palladino recently tweeted: “You might know the argument that the archaeologists who find your bones one day will assign you the same gender as you had at birth, so regardless of whether you transition, you can’t escape your assigned sex.”  (At least the last part of that statement is true: you can’t escape your assigned sex.  No matter what you do or how hard you try.)

Proving her scientific bona fides, Palladino characterized assigning sex to an ancient human as “b——-.”

I am sure a large percentage of cave persons and ancient peoples “identified” as other than the sex they were “assigned” at birth.  I’m guessing many Viking couples, for example, probably switched genders after a few years of marriage or cohabitation.  I bet many a “Hagar the Horrible” became “Helga the Horribles.”  And vice-versa.  Just kidding.  And I fervently wish Emma Palladino were kidding, too.

The relatively small but effective woke mob is now poised to usurp archaeology.  Archaeology!  It has already partially annexed mathematics and is simultaneously working to take over engineering.  Far too late do sane people realize and react to these facts.

The left must have everything, everywhere, all the time, forevermore…with no exceptions.  And leftists will stop at nothing to achieve their goal of absolute domination.  The Democrat party and its public relations arm, the mainstream media, are the far left’s main vehicle for making this happen.  JFK be damned — today’s Democrats will go anywhere and pay any price in defense of tyranny.

Make no bones about it.