The notion is people are moving away from proggie controlled places to ‘free America’. Let’s hope they leave those politics behind them too.

Blue cities and states have lost ground since the spring of 2020.

The Census Bureau formally counts the population only once every decade, but it updates its population estimates annually. While those estimates are not always rock-solid, they reflect the best available data — more precise than moving-truck rentals — to show where our people are shifting.

The latest data add the population change for counties between mid 2020 and mid 2021, following the release in December of the population shifts for states. First, the grim national news:

With immigration sharply curtailed during the pandemic, Americans just aren’t reproducing fast enough to make up for deaths from Covid. Some of this is a temporary problem that should get a bit better as things reopen, but it also reflects long-term trends as birth rates fall. The United States remains in an enviable position: We can add as many people as we need just by letting in more immigrants, if we want. But depending too much on immigrants is a poor substitute for a more balanced approach to population growth built around more born-and-raised Americans.

The boomingest place in America? Idaho. If we measure from April 2020, when the official census was taken, to July 2021, only ten states have grown their population by 1 percent or more: 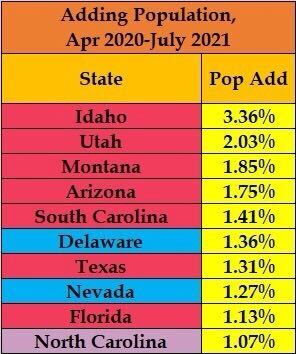 If you’re keeping score at home, that’s seven states with Republican governors and Republican legislatures, one with a Democratic governor and a Republican legislature, and two with a Democratic governor and Democratic legislature. Of course, political leadership isn’t the only factor; who governs a state doesn’t even fully describe its governing climate, which may be built into long-standing laws. But the pattern is nonetheless pretty pronounced. Most of the growing are states in the Sun Belt or the Rockies with large religious populations.

By contrast, ten jurisdictions (eight states, D.C., and Puerto Rico) lost at least half a percent of their population: 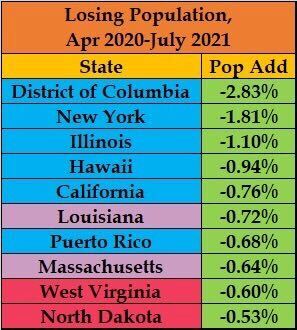 Again, if we are keeping partisan score, the big blue states (New York, Illinois, and California) stick out along with D.C. and Hawaii as the top five slots on the list, with the Democrat-affiliated government of Puerto Rico in seventh place. The rest of the list includes two states with unified Republican governments, one (Louisiana) with a Democratic governor and Republican legislature, and one (Massachusetts) with a Republican governor and Democratic legislature.

Drilling down to the county level, we see Idaho and the surrounding areas with the strongest growth, as well as big parts of Tennessee, east Texas, north Georgia, and most of Florida outside Miami, but also people fanning out of cities such as New York and D.C. to the surrounding suburbs. The Rockies and the southern Appalachians are doing strongly, as Americans literally headed for the hills; the big cities and the Mississippi Valley took a pounding, and no state suffered as uniformly between its big blue city and its red counties as Illinois.

The hardest-hit counties in population decline, reflecting remote-work patterns and rising crime and housing costs, were dominated by the big blue cities. Four of the top ten were Manhattan, the Bronx, Queens, and Brooklyn, plus San Francisco and neighboring San Mateo County, Boston, and Jersey City. 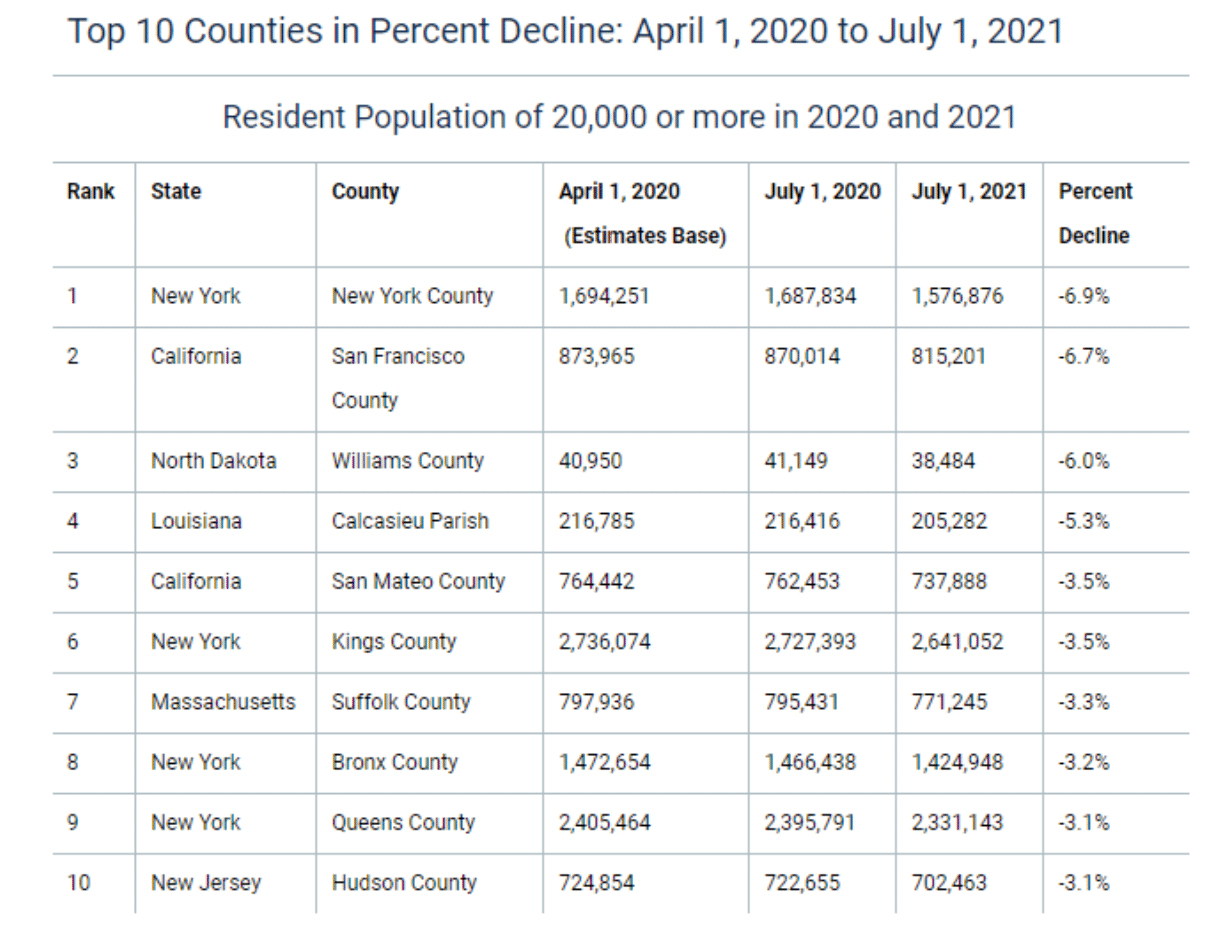 What do we see in the booming areas? A lot of communities like The Villages and Myrtle Beach, and nine of the top ten in Florida, Idaho, or Utah. 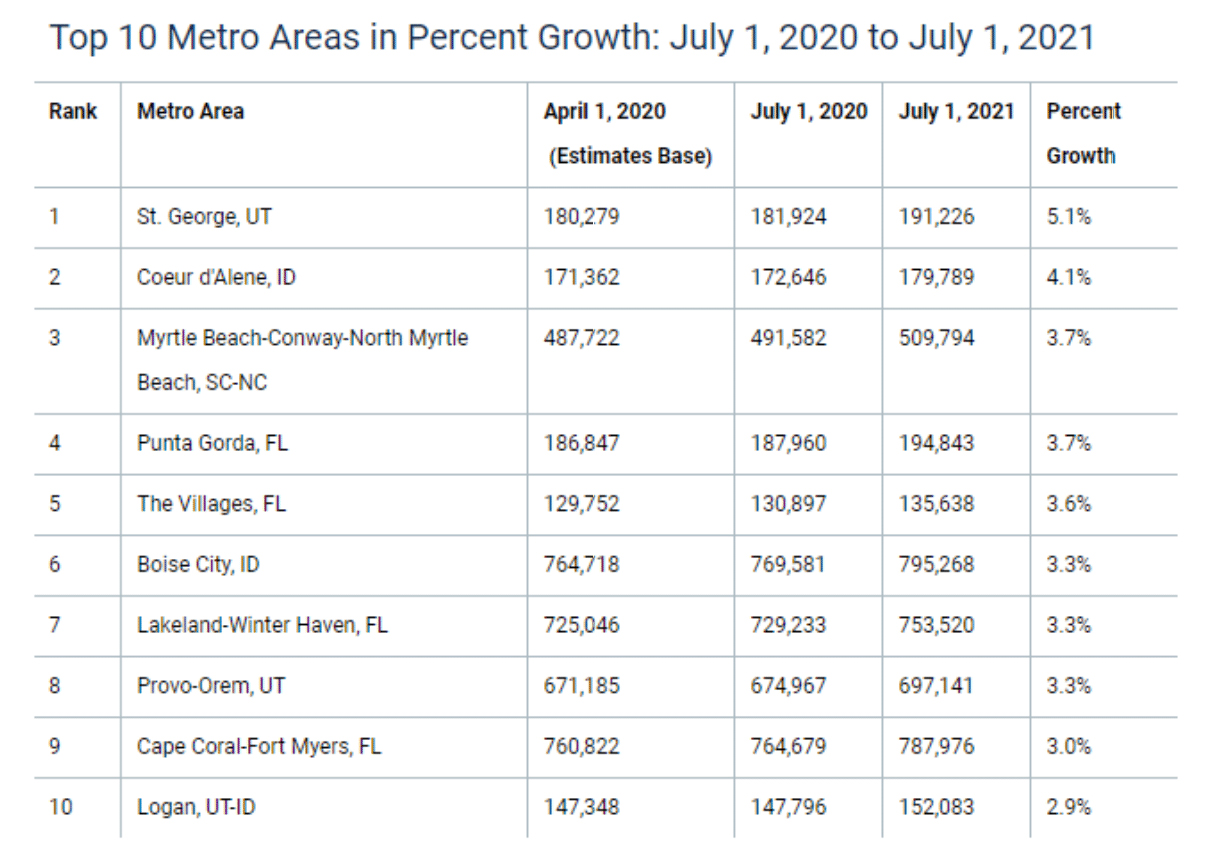 As I have discussed at some length before, Democrats dodged a bullet by having the census conducted as of April 2020, rather than after a year of pandemic, remote work, and progressive law enforcement. If we take the mid-2021 population figures and run them through the formula for reapportionment, two states gain an additional House seat (Texas and Idaho), while two lose a seat (California and Minnesota). That is likely a net gain of two seats for Republicans in the House, and almost certainly a net gain of two electors in the Electoral College in a normal year.

Without getting too far into the math, these are the districts that just make it, and the ones that just miss, if we run the 2021 numbers: 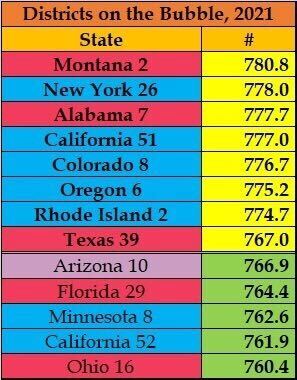 While California would lose a seat if reapportionment was done as of mid 2021, it would also not be that distant from losing two seats. That is a grim trend for the Golden State if it continues in that direction for the rest of the decade, even at a slower pace post-pandemic. New York may also continue its downward trend, which has been ongoing for quite some time; the state had 45 House seats in the 1940s. Florida and Arizona, by contrast, have edged closer to adding another seat just from growing their populations since the census. In terms of the national balance of political power, this seems like good news for Republicans — but help that won’t arrive until 2032.

At least in the political climate of the moment, if not a decade from now, one thing all of this suggests is that we may see shifts in the relationship between the national popular vote for Congress and the presidency and the outcomes, as the major blue states in the next few years are likely to represent fewer people per House seat than the major red states.