Do increased gun sales lead to increased crime rates? According to gun control activists, the answer is “yes,” but a new study published in the Journal of Surgical Research finds no connection between firearm purchases and the number of crimes. I’m very pleased that Dr. Mark Hamill, a trauma surgeon and associate professor at the University of Nebraska Medical Center who was a primary author and researcher for the new study, could join me on today’s Cam & Co to discuss his findings and the current state of “gun violence” research in the medical community.

For this particular study, Hamill and his associates used both national and state-level data on crime rates between 1999 and 2015 as well as NICS reporting data over the same time period as a reasonable proxy for gun sales. Hamill hypothesized beforehand that there would be no correlation between gun sales and crime rates, and as it turns out, that’s exactly what researchers found.

Nationally, all crime rates except the Centers for Disease Control and Prevention–designated firearm homicides decreased as firearm sales increased over the study period.

This study follows on previous research released by Hamill and others back in 2019 that examined concealed carry laws and crime rates; looking to see if changes to a state’s concealed carry laws resulted in more crime overall. Just as in this most recent study, the data found no significant association between “shifts from restrictive to nonrestrictive carry legislation on violent crime and public health indicators.”

As Hamill says, the results make sense. Most people who legally purchase and lawfully carry firearms are never going to commit a violent crime, so increasing the number of those who are legally exercising their Second Amendment rights shouldn’t result in more violent crime. As for gun sales and crime rates, while the number of firearms sold might vary from year to year, the number of privately-owned firearms in the United States continues to increase. If more guns equated to more crime, then we’d expect to see a steady rise in criminal offenses year after year. Instead, a graph of violent crime rates going back to 1900 shows that crime tends to ebb and flow in waves that can last for decades. 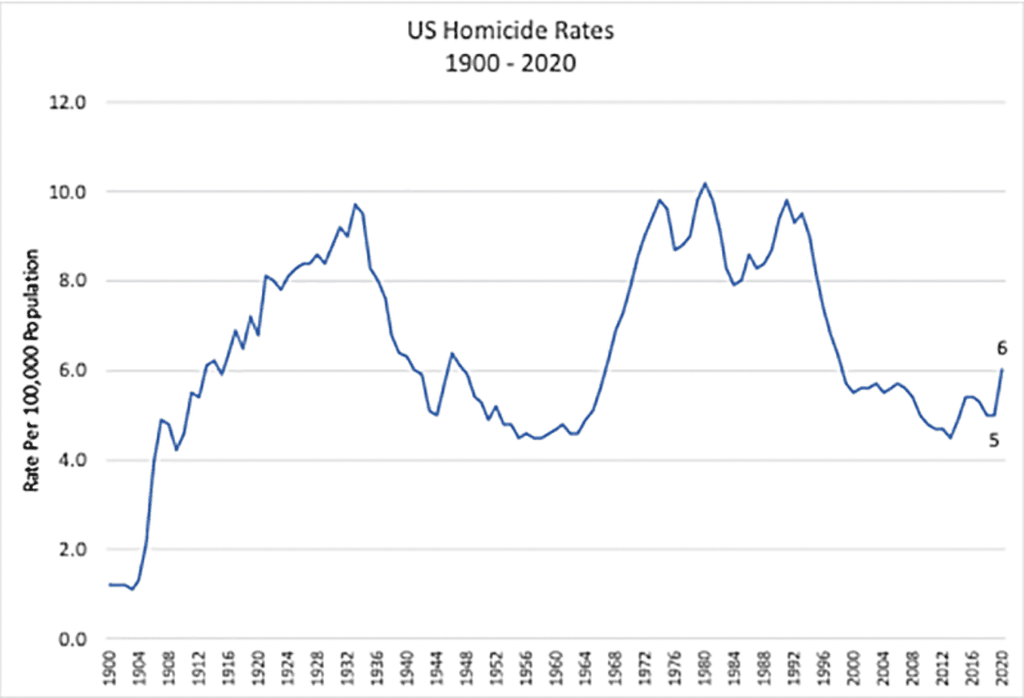 Note, by the way, what happened to the homicide rate in the years after the passage of the Gun Control Act of 1968. While homicide rates had been fairly flat throughout most of the 1960s, there was a sharp increase starting around the time the GCA became law, and a steady decline didn’t begin until more than two decades later in the early 1990s.

That crime decline generally continued until 2020, when shootings and homicides soared in the midst of the COVID-19 shutdowns, disruptions to the criminal justice system, riots, and a pullback from proactive policing strategies. Gun sales also exploded in 2020, but despite the assertions of some gun control activists that the increase in gun purchases must have played a role in the increased violence, there isn’t much evidence that was the case, as even some anti-gun researchers have acknowledged.

Dr. Garen Wintemute of the Violence Prevention Research Program at UC Davis investigated a possible relationship between 2020’s gun sales and the increase in crime and found none.

“Instead, [researchers] concluded that unemployment, economic disparity and physical distancing exacerbated by the pandemic were far more potent predictors of increased violence,” the FiveThirtyEight article notes.

Hamill’s study comes at a time of heightened interest in the gun control debate within the medical community, including a special issue of the Journal of the American Medical Association dedicated to examining “gun violence” and advocating for a host of new gun control laws. Hamill says that unfortunately there does seem to be a bias towards gun control among many researchers, and described how this most recent study was actually rejected by another journal; not because of any issues with the researcher’s methodology, but because the journal’s editor didn’t like the results.

Thankfully this new paper found a home at the Journal of Surgical Research, and I would encourage you to not only read the paper but share its findings far and wide. More guns does not equal more crime, and we’ve got the data to prove it.